Senjokaku carries the meaning of Hall of a Thousand Tatami Mats which is located in the Toyokuni Shrine. The name gives us an idea of how spacious the building is, the locals know the shrine as Hokoku Shrine. The shrine is located very close to the famous Itsukushima Shrine which is beside on a small hill. Senjokaku is a very picture worthy location as you could take both shrines at the same time, Itsukushima shrine and Toyokuni Shrine, and at an up-close, upward angle you can take some of the most amazing shots.

The Story of Senjokaku Hall

The shrine is built for the great warlord known as Toyotomi Hideyoshi and his loyal partner Kato Kiyomasa, he was one of the unifiers of Japan during the 16th century. Which was stated in a letter written by Ankokuji Ekei, the head monk of Ankokuji Temple, the purpose of building the Toyokuni Shrine including the Senjokaku (千畳閣)Hall for the great warlord. The official construction of the Senjokaku Hall started in 1587 when Ankokuji Ekei requested Daiganji Temple, which is the temple in charge of construction in Miyajima to build a Buddhist library that could be able to hold the grand chanting of Senbu-kyo sutras event every month.

The Tragedy of Senjokaku Hall

When you get to the hall you would notice that there is huge sense of incompleteness of the hall as the building is without main walls therefore wind flows from every direction and where Japanese Shrines mostly have a very grand front entrance, this has no front entrance at all. The reasons for these are because the passing of the founder, Toyotomi Hideyoshi, the warlord passed away 11 years after the construction started. After that, Tokugawa Ieyasu came in control over the area rather than the Toyotomi family. Therefore, the building was never completed.

What is on the Hall of One Thousand Tatami Mats in today’s world? The shrine is now a popular landmark in Miyajima where many people come and to relax and many local souvenirs are available too such as tooth picks and traditional ones.

Located just beside Senjokaku Hall, the five-stories pagoda was contructed in 1407 but was reconstructed in 1533. The main deity in the pagoda is the Buddha of Medicine, accompanied by the Buddhists saints Fugen and Monju. The whole structure is 27.6 meters tall and it is built in Japanese style with a strong Chinese influence such as on the top of the wooden pillars and on the tails of the rafters. The interior of the pagoda is decorated with Buddhist beliefs such as the Kannon Bodhisattva, Eight Views of Shohshoh, a dragon, lotus flowers and the Shingon Hasso Sutra painted on the ceiling. The building is said to be one of the only five which could withstand horizontal oscillation caused by earthquakes and typhoons. 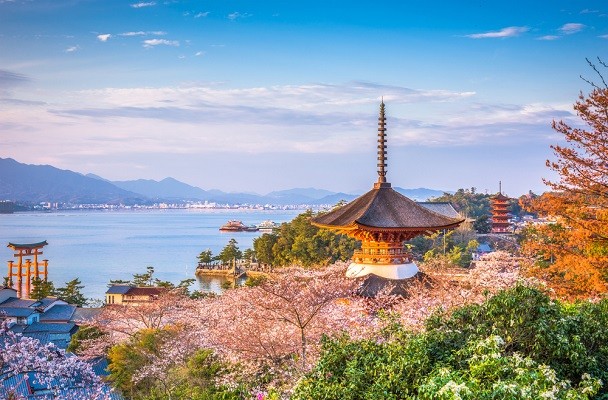