Miyazaki, located in the southeastern part of Kyushu, is an area characterized by its southern climate. Its average temperature is relatively high, has long daylight hours, and more days with clear weather. It is popular for being rich in nature and has various unique dishes.

Miyazaki’s nature spots include mountain ranges such as the Kyushu Mountains and Mount Kirishima located in the western part of the prefecture. On the eastern side, there is a coastline facing the Pacific Ocean that is around 400 km wide. In addition, Miyazaki is also a treasure grove of natural ingredients due to the warm climate. Its vegetables, fruits, Wagyu beef, and seafood are famous nationwide.

Miyazaki has sightseeing spots throughout the prefecture, and can be split into four parts: the northern area, central area, southern area, and the western area.

There are a number of superb spots in the northern area, from the mountains to the sea, such as the country’s famous “Takachiho Gorge” and the beautiful rias coastline “Hyugamisaki”.

There are many tourist attractions in the central area which is around Miyazaki city, such as “Aoshima”, which is surrounded by wavy rocks called “Devil’s Washboard”.

The western area is mostly made up of mountain ranges. “Ebina Plateau”, which is characterized by a beautiful volcanic lake, “Ikoma Plateau”, where flowers of all four seasons bloom.

There are many tourist attractions near the sea in the southern area which is filled with tropical atmosphere, such as “Sun Messe Nichinan”, where seven Moai statues are lined, and “Toi Cape”, located on the southern edge of the Nichinan coast.

Food and Restaurants of Miyazaki

Miyazaki takes advantage of its tropical climate with its fruit cultivation and breeding of cattle and chicken. Many restaurants offer dishes using these Miyazaki specialties. Restaurants are concentrated in Miyazaki city, and others are dotted across coastal areas such as Hyuga city in the north and Nichinan city in the south.

Miyazaki Gyu is a Miyazaki brand of Wagyu beef. The meat is very soft, with a good balance between fat and lean. Dishes using Miyazaki Gyu include yakiniku, steak and shabu-shabu.

Hotels and Ryokan of Miyazaki

Accommodation facilities are concentrated in Miyazaki city, Miyazaki Station, and Aoshima area. There are various types of lodgings such as hotels, Ryokan, small Minshuku (bed and breakfast), and guest houses. In addition, accommodations are dotted along the coast, and lodgings overlooking the Pacific Ocean are also popular. 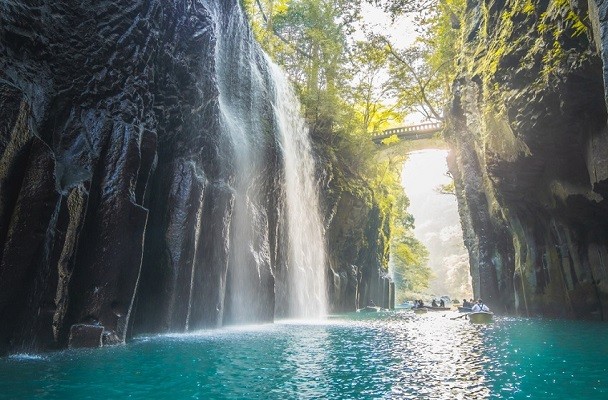